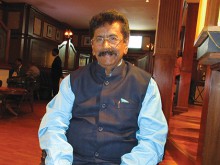 Dev Nair, President-AIFMP, talks about the upcoming PAMEX ’15 – scheduled to be held at  Bombay Exhibition Center (BEC), Goregaon, Mumbai from December 9-12, 2015. “I am feeling great that PAMEX is returning to Mumbai after a gap of nine years, having made its presence felt in North India. With the return to Mumbai, the printers of Maharashtra and other surrounding regions are getting overwhelmed as they get a chance to visit in great numbers. The event will be organised in the well-known fair ground – Bombay Exhibition Centre,” he shared. This year’s PAMEX is very well received and already 4,000+ sq. m area have been booked by nearly 100+ exhibitors. “On the back of PAMEX ’15 – we have an experienced team of Print-Packaging.com (P) Ltd, who have a track record of organising many packaging shows. With their experts at the helm, we are pretty sure that the PAMEX ‘15 will be held in an organised manner, like any international fair. There is also good news of having a dedicated Chinese pavilion which will have a good number of exhibitors from China in an earmarked area of approx. 2,000 sq. m; with this we aim to have a net exhibition area of around 10,000 sq. m,” told Dev happily.

“As regards to further promotion of PAMEX ‘15 – we are planning to organise Road Shows, which will be held in cities like Amritsar and Ludhiana to attract more exhibitors from these areas,” he shared. “Besides, with the active support of all affiliate associations, the success of the event looks pretty good, as always.  Mumbai Mudrak Sangh – one of the supporting associations – will also be organising an international conference partnering with PrintWeek on second day of PAMEX ‘15,” he told.

On asking about the participation from Educational Institutions – Dev was happy to reveal, “We are open in terms of offering them complimentary stalls to disseminate information about various facilities/courses they offer at their Institutions.”

Dev also informed that AIFMP would also be organising NAEP Awards this year in September 2015, which encourages and motivates Indian printers who push the bars and attain excellence in their respective areas of print expertise, and this event will eventually also help to promote PAMEX as well. “Putting in our best efforts, we hope to have a very successful participation from Exhibitors as well as the Visitors for the upcoming PAMEX ‘15,” concluded Dev optimistically.