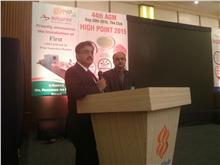 The Annual General Meeting of Bombay Master Printers’ Association (BMPA) on 30 September 2015, at The Club, Andheri in Mumbai, created a bit of a print history when the BMPA and the Mumbai Mudrak Sangh joined hands.

The BMPA, an association that represents 500 print and allied member businesses in Mumbai and Navi Mumbai and MMS announced a long-term alliance at the BMPA’s annual general meeting. The meeting was jointly addressed by the presidents of BMPA and MMS.

Faheem Agboatwala, President, BMPA said, “For more than half a century this great city of ours has had two print associations championing the cause of the printers.”

Agboatwala said, “For years we have had requests of getting these two print heavy weights to cooperate.” Agboatwala added, “In the future, Mumbai needs only one printer association and we want to make a path heading towards that.”

Tushar Dhote, president of the Mumbai Mudrak Sangh said, “The MMS and BMPA team have put in several hours of brain-storming sessions in pinning our thoughts together in how we both can collaborate in future. Finally, we have laid down a foundation for working towards achieving a common goal for the printers of Mumbai city.”

Dhote explained, “The reason for coming together is to strengthen our representation collectively, to build confidence among our fellow printers by working as a team, to show our seriousness to the manufacturers and trade suppliers and supporting fair price, and to make a strong presence at the AIFMP. The aim is to build an intelligent workforce through proper training and education.”

Both the associations have launched a joint Drupa offer. Plus BMPA and MMS have inked a charter of collaboration for the Print Summit on 29 January 2016.

During the Print Summit, the two associations will launch “its first joint magazine issue with the intention of having a common magazine in the days and months to come.”

Dhote concluded, “I am going to endorse what Faheem Agboatwala said – this city requires only one printer association and the BMPA and MMS have today taken the first step towards that goal.”

Other than the alliance, the BMPA elected a new committee, and atalk on marginal costing was presented by chartered accountant Rajiv Kumar. In addition to this, a talk on insurance of used machines was delivered by specialist Yezad Daruwala. Plus presentations by Canon India and Autoprint were a part of the meeting.