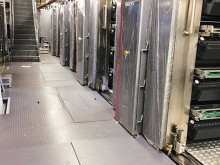 With the press towers clearing the overhead by no more than an inch, the first Magnum Compact press system in the United States has been installed snugly and initial tests on its six 2 x 1 units completed. The press is currently undergoing commissioning tests and shadow production before moving into full production this month.

The new press for Advance Publishing of Staten Island, USA, complements the company’s existing double-width press line and offers backup to the production of the daily Staten Island Advance while adding capacity for other contract newspaper, insert and commercial work.

Among the Magnum Compact features attractive to Staten Island Advance was the Goss Autoplate technology that delivers fast make readies and enables successive jobs to be run with complete plate changes within two minutes. This is accomplished with minimum waste and contributes to maximum press uptime. Plates that have been removed may be reused for repeat production of shorter run jobs, further extending the value proposition of the press. In India SLKCG are distributor of Goss International who shall be displaying in Hall  1 Stall I-06 at PAMEX ‘15.