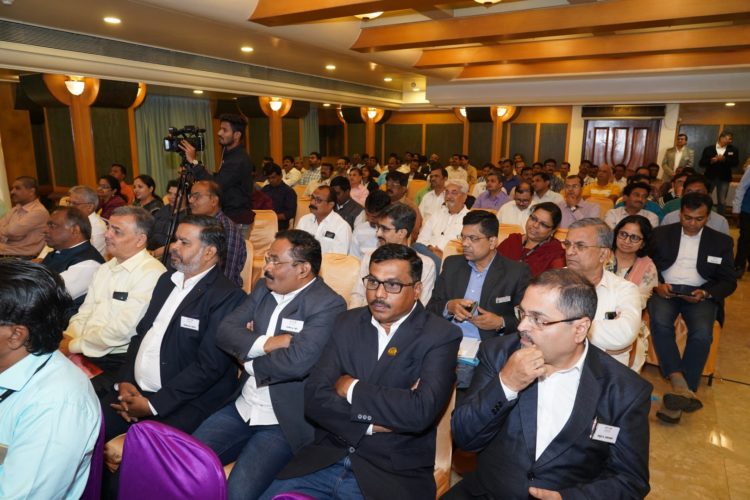 An early pause was put on registrations for the Pune event to make sure that the registrants got seats at the venue that did not have unlimited capacity.

The theme of ‘Convergence in Print’ is resonating with the printers as they turned up in large numbers to hear the experts and their peers discuss the latest trends in the industry. The centre of the Pune city, where printers work and reside, was the place chosen for the third stop of the promotional road show of PAMEX 2023. Held at The President Hotel on 23rd December, the event saw more than 400 visitor registrations from Pune and the nearby areas.

As in the previous stop, the Pune roadshow was structured around a half-day conference and a full day table-top exhibition. The event not only recorded a great number of attendees but also provided a unique informal atmosphere for participants to network and share with each other their experiences on ‘Convergence’.

“In simple words, Convergence is the merging and integration of two or more distinct technologies in a single system’, said Sahani in his opening remarks.

The discussion revolved around what Convergence meant to all the panellists and how they were applying it in their respective fields. It raised some interesting points on how the direction of Convergence needs to be different for each printer depending on their core strengths.

The discussion was followed by two technology presentations- one by Mohan Pailwan from Vinsak India and the other by Pawandeep Sahni, OMET India. Where on one hand Mohan spoke about the essence of smart packaging while underlining the importance of brand protection and consumer interaction, Pawandeep took the attendees through Convergence strategy, approach and execution. Talking about the ‘Convergence Mindset’,
Pawandeep said, “How we define ourselves, defines how we think convergence. The new approach will certainly require reimagining operations.”

Girish Datye, Past President, the Pune Press Owners’ Association welcomed the delegates giving a roundup of the activities of the association and promising full support to PAMEX while exhorting the assembled delegates to plan their visit well in advance to the March event in Mumbai.

The Honorary Secretary of All India Federation of Master Printers’ Association (AIFMP), Raghabendra Dutta Baruah, spoke about the history and activities of the Federation and the National Awards for Excellence in Printing (NAEP Awards) “It is a pleasure to see enthusiastic printers participating in large numbers for this event. PAMEX is the flagship event of AIFMP, and in 2023, it is all set to break all past records,” said Raveendra Joshi, President, AIFMP. He also gave an overview of the upcoming AIFMP Bhavan and the details of NAEP awards, which is concurrently held with PAMEX.

Tushar Dhote, Co-Chairman, Pamex gave a rundown of the status of Pamex 2023 highlighting the growth of the event and the rationale of the underlying theme of the Exhibition. “The theme of ‘Convergence in Print’ emerged in the deliberations of the Core Group consisting of leading Printers, Technology Providers, AIFMP officials and the Event Managers. The structure of the promotional roadshows was also mooted in these meeting,’ revealed Dhote.

Tirthraj Joshi, Vice President, PPOA, rounded up the conference while delivering the Vote of Thanks.

Indore will be the next destination for PAMEX promotional journey, where the conference and table-top exhibition will be held on 24th January 2023 at Brilliant Convention Centre. The event will be organised by AIFMP and Indore Master Printers Association (IMPA), in association with Print-Packaaging.com Pvt. Ltd.

For any further details, please send mail to info@print-packaging.com