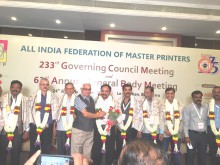 A new team that will govern AIFMP for the next one year was elected last weekend at the 233rd GC Meeting at Bengaluru hosted by the Karnataka State Printers ‘Association.
Prof. Kamal Chopra, the Vice President (North) in the outgoing body was elected the President after an intense campaign that had for the first time seen an extensive use of Whatsapp messages by rival groups. Anand Limaye was elected the Honorary General Secretary, a position that he had previously held in 2014-15. The new team is as follows:

Thanking the GC members on his election, Kamal Chopra said, “It has been my dream to see AIFMP at par with the best association in the world and to get government recognition for the printing industry. During my tenure that will be the constant focus of the federation.”

The new team will officially take over from the 1 October and remain in place till the 30 September 2017.