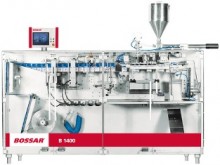 Wraptech India has launched its first Bossar machine- B1400, manufactured at it Navi Mumbai based plant, and has presented it at Interpack 2014. The company had recently announced its joint venture with Barcelona-based Bossar to produce and market Bossar machines in India.

Ashish Meghani, Managing Director, Wraptech Machines, said, “Wraptech is a specialist in vertical form-fill-seal machines (VFFS). The JV has helped us to achieve the same competitive edge in horizontal form-fill-seal segment as well. The B4100 is the most successful product of Bossar worldwide. Manufacturing it in India gives the benefit of cost effectiveness to our customers.”

Suitable for food, pharma as well as chemical applications, B1400 is a horizontal form-fill-seal machine, specially designed to make flat sachets with small and medium size product doses (between 110 and 400 cc). It runs at maximum speed of up to 240 sachets a minute in duplex version.

In India, there are already five B1400 at Nestle and Colgate, which were commissioned by Bossar. Wraptech has a capacity to manufacture 20 B1440 machines in a year, while its target for the first year is to sell at least 10 mahcines.