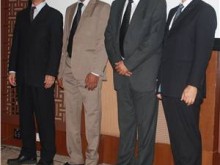 Delhi-based Provin Technos has been appointed as a pan-India Indian representative of the Ryobi MHI Graphic Technology (RMGTL), a joint venture between the two Japanese press manufacturing giants, Ryobi and Mitsubishi Heavy Industries Printing & Packaging for implementation of business integration in the field of sheetfed offset printing presses. The joint venture is implemented from 1 January, 2014.

Provin Technos is also an Indian representative of Rotatek narrow web presses and MarQuipWardunited range of reel to sheet machines.
“The joint venture aims to achieve integration of the product line-up with significant synergy effects including product enhancement, expansion of product development capabilities, production cost reductions, and improvement in sales and service networks. Now, we will be able to offer a complete range of printing machines’ sizes from A3 to B1 and above in all possible configurations like inline coating, perfection and other,” said Vinay Kaushal, Director, Provin Technos.
“Team Provin will take over operations including the service and spare parts requirements of the existing users of Mitsubishi and Ryobi sheetfed offset printing presses. The transition of operations from both the existing companies has been planned meticulously so that the there is no intervention to the services to the existing customers. The sales and service network has been identified and put in place to ensure the uninterrupted support to the customers during the transition period,” concluded Kaushal.