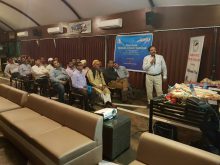 “Varanasi was a great and surprising experience as we were greeted by D K Dhawan, who used to be a GC member in the seventies before he migrated from Delhi. He narrated of days gone by as we met up with the other printers of the fledgling Varanasi Offset Printers Association (VOPA, their President Jai Mittal and the General Secretary, Anoop Nagar,” reported Kamal Chopra, Past President, AIFMP, who is leading the Print Yatra in it’s foray into UP. The Yatra reached Varanasi in the late evening after traversing nearly 350 kms and stopping at various towns on the way. A presentation on Pamex was part of the evening function organised by VOPA.

The Yatra started early morning today on its onward journey to the next stop- Gorakhpur and the house of the iconic 95 year old GeetaPress.