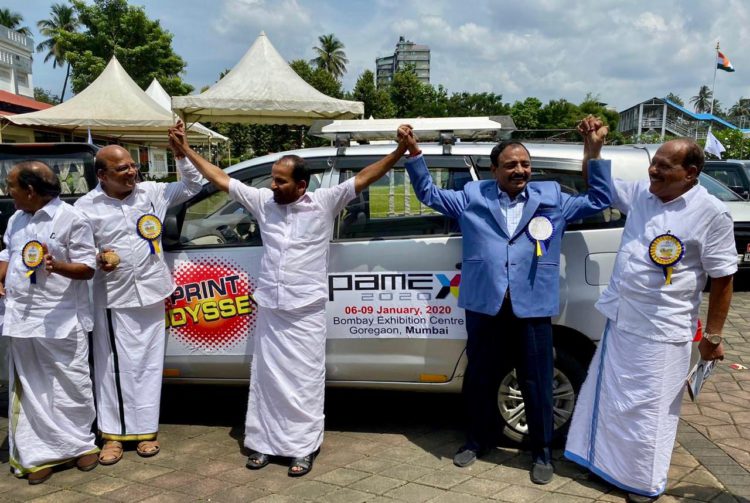 The domestic promotion for PAMEX 2020 is on full swing. Team PAMEX was present at the 34th Annual Conference of Kerala Printers Association in Thrissur. More than 500 printers were present at the conference and many of them pre-registered to visit Pamex Exhibition, which is scheduled from 6-9 January 2020 at Mumbai.

On the side-lines of the conference, Team PAMEX launched Print Odyssey- a program to reach the printers at the grass root level. The aim of this Odyssey was to understand the need of the printers and to promote the exhibition. The Odyssey was inaugurated on 29th September, 2019 by the chief guest Sri T. N. Prathapan, an MP from Thrissur. The ceremony was performed by the traditional breaking of coconut on the auspicious first day of Navratri.

The next day, Team PAMEX including Mr. C. Ravinder Reddy, VP South- AIFMP and Prof. Kamal Chopra, Chairman- PAMEX headed to Muringoor. More than 25 printers assembled under one roof. Prof. Kamal Chopra addressed their concerns and suggested them to form clusters to reduce their production cost. It was a fruitful start to the day.

From Muringoor, the Team headed to Kochi and visited Ernakulam City Mehkala. The printers facilitated the Team and presented them with a list of issues they were facing. Mr. Reddy and Prof. Chopra addressed their concerns and provided necessary solutions.

The next stop was Thrippunithura. The printers were facing an issue regarding recycling of Polymer. There were no recycling plants nearby and they had to send it to Mumbai to correctly dispose it off. Prof. Chopra spoke to Mr. Parikh of Technova Industries to resolve the issue. He promised to give them a working solution within 15 days. The final stop of the day was at the office of Kerala Master Printers Association. A team of 15 printers were present during the presentation of PAMEX. Prof. Chopra spoke about the future of Printing and had a lively discussion about 3D Printing. The association promised to send a delegation to visit PAMEX and also take part in the WPCF conference.

On 1st October 2019, the Team visited CMS Press situated in Kottayam. Established by Rev. Benjamin Bailey, the press opened its doors in 1821. It is the oldest Printing Press in Kerala. Rev. Bailey is known as the Father of Printing across the state.

A team of 20 printers assembled for the meeting there. They raised their issues regarding the different slabs of GST. Prof. Chopra spoke in detail about their issue and educated them about the different government programs they could avail to further the printing industry in the area.

The Odyssey headed towards Thiruvananthapuram while making pit stops at Adoor and Kottarakara. The final stop for the Print Odyssey in the state was at the office of Kerala Printers Association. A team of 20 Printers were present. Prof. Chopra spoke of the need to evolve from “Ink on Paper” and embrace the change in the industry.

Mr. Reddy congratulated the new office bearers of the association and promised to hold a seminar in the local language where experts would be called in to address various issues such as GST, Raw Material Procurement and Disposal.

“With the beginning on the auspicious occasion of the first day of Navratri festival, Print Odyssey at Kerala was a fantastic experience. I would like to thank Mr. C. Ravinder Reddy for his dedication and Mr. Ashok Kumar- Treasurer of KPA for his untiring efforts towards the success of this event.” said Prof. Chopra.