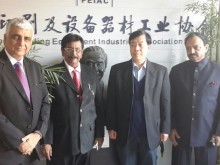 The next edition of Print China 2015 organised by the Printing and Printing Equipment Industries Association of China (PEIAC) will be held in Guangdong (China) in April 2015. Several printers including International and Chinese companies visit this exhibition.

The President of All India Federation of Master Printers (AIFMP) met Mr. Lu Chang’an, Secretary General of PEIAC and they discussed the modalities of having larger visitors from India for PrintChina 2015 and bigger contribution of Chinese exhibitors to participate at PAMEX 2015. It was agreed that a separate India Day will be celebrated at the Print China as in previous years. The PEIAC will also host a forum where they will bring together the Chinese manufacturers and Indian printers for one to one meetings.  This could lead to direct business and also could be a prelude for the Chinese manufacturers to participate at Pamex 2015 in India in a larger way. Mr. Kamal Chopra, Chairman, International Relations – AIFMP and Mr. Anil Arora, President – Print-Packaging.com (P) Ltd, the Event Manager for PAMEX 2015 were also present during the meeting.

”China Print Overseas Show Co. Ltd, the exhibition organizing arm of PEIAC will act as the agent in China for Pamex 2015 Exhibition and will endeavor to fill an area of 2000 sqm of China Pavilion in Mumbai”, said an upbeat Mr. Lu.