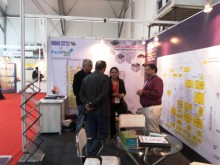 The All India Federation of Master Printers (AIFMP) iconic show PAMEX 2015 has once again marked its presence at Print Pack 2015, which was held from 11 – With the fervent response from the manufacturers and suppliers of printing and allied industries at the Pamex stall during PrintPack 2015, the indication is that PAMEX 2015 is all set to recreate the magic of the landmark 2006 show held in Mumbai, in terms of exhibitors and visitors attendance.

AIFMP and Print- Packaging.Com (P) Ltd, the event manager of the 10th edition of Pamex 2015 promoted the show with great zeal. Not only the Indian companies, but also the companies from China, Taiwan, Korea & USA showed immense interest in the show being held in Mumbai from 9-12 December 2015.