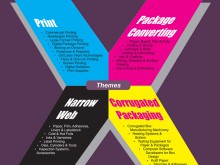 Building on the immense success of 2015, the show portends bigger bang in the upcoming edition.

Organized by All India Federation of Master Printers (AIFMP) in association with Print-Packaging.com (P) Ltd,Pamex 2017 is now only six months away. After the humongous success in 2015, when the show was shifted to Mumbai, Pamex is promising to be bigger & better than ever before.

“With more than 6 months to go, we are already bigger than the last edition. We are striving to get more companies on board and will make all efforts to make Pamex as huge as possible,” said Tushar Dhote, Chairman of Pamex.

To that extent, Pamex has a tie-up with KVN Media, a Chinese company who are the co-oragnisers of ‘All In Print’, China. Their expertise in China’s Print industry is proving beneficial for Pamex and a China Pavilion in excess of 1000 sqm is expected at the event.

“With the Indian Printing Industry becoming bigger with every passing year, we have more Foreign Companies looking to expand their interests in India. Pamex 2017 promises to showcase the very best the Printing Industry has to offer,” said Dhote.

The event is being marketed both abroad and in India. Team Pamex has participated in various Indian & International events such as LabelExpo India- Noida, Drupa-Dusseldorf, PrintPack India-Noida, Sino Corrugated & Sino Folding Carton- Shanghai & China Print- Beijing, among others.

The promotional campaign kicks off with an International Media Week, being organized in New Delhi in the first week of August. The first of its kind event will see International Media and associations from several Asian and African countries rubbing shoulders with their Indian counterparts in an event that will focus on the developments in the Indian print industry and also provide an opportunity to the exhibitors to announce to the world, new developments and detailed plans for Pamex.

Extensive promotion through road shows is planned and with cover over 50  grassroots towns in Maharashtra, Gujarat, Telangana, Andhra, Kerala, Tamil Nadu, Karnataka and Uttar Pradesh. At the regional level, promotional events are also planned in Pathankot, Lucknow, Indore, Ahmedabad, Bangalore and Chennai. Pamex will also go International this year with events in Colombo and Dhaka.

“Online Visitor Registrations are going better than we expected at this stage. In December, I had said we expect a 100% increase in visitors at the show. It looks like we will surpass that expectation,” said a confident Neetu Arora, Director of Print-Packaging.com (P) Ltd.

Pamex 2017 will be held from 18-21 December 2017 at Bombay Exhibition Centre, Goregaon.  For more information please visit www.pamex.in or send an email to info@print-packaging.com