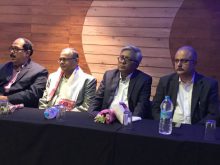 For the first time a Pamex Roadshow was held at Guwahati, Assam on 5 December, 2017, under the Regional Contact Programme, hosted by All Assam Printers’s Association.

Meantime, the Grassroot Contact Programme continued unhindered in Maharashtra with a roadshow at Phaltonhappening on the same day in the morning. The next Roadshow is scheduled at Palakkad, Kerala on 7th Decemberand at Dindigul, Tamil Nadu on 10th December.