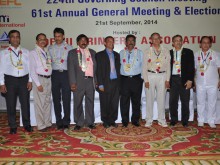 The Annual General Body meeting of All India Federation of Master Printers (AIFMP) was held on September 21, 2014 at Hotel The Ashok, New Delhi. At the event Dev Nair took over the reins of AIFMP as its President.

Pamex, the flagship event of AIFMP, is coming to Mumbai this year and Dev Nair, the new President, also happens to be from the maximum city. “Pamex was held in Mumbai eight years ago under my chairmanship and it was a big hit. The Show is coming back to Mumbai this year and incidentally I am on board again. The new management of the association looks forward to a very successful event,” said Dev Nair, President, AIFMP.