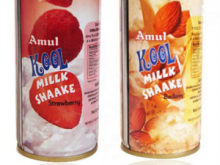 “The packaging has been redesigned to define the cool factor, which was lacking in the current design and hence the product could not effectively connect with its target audience”, according to Deepti Kshirsagar, Founder- Director, Wow Design. In line with the new concept, the design firm rechristened Kool Milkshake as ‘Kool Shakers’.
The six-year-old Wow Designs worked with Amul from the initial concept, implementing the packaging design and building the brand.
allenge
Wow Design Co-Founder and Director, Saswata Das, said, “The challenge was two fold – to communicate the richness of ingredients in the product as well as the fact that it’s meant for the coolest of youth. I think what really clicked well was the smart way in which we fused both the stories and made the ingredients do activities, which youth today regard as cool stuff. For instance, the dynamic strawberry on a skateboard.”
“The revamp of the complete packaging design has brought a refreshing look and feel to the product. To align the whole look the product was renamed as Shakers.” added Kshirsagar.
Rupinder Singh Sodhi, Managing Director, Gujarat Cooperative Milk Marketing Federation (AMUL) said, “Practically 65% of Indian consumers are very young and so designing needs to be very contemporary to target this youth segment.”
“We feel that Wow Design’s work is going along with the times and also going into many of the psychological aspects which is very good. I think that as far as the new packaging of the Amul Kool Shakers goes it has shaken up the market. One can see the product from a distance and the brand is very clear, trendy and its overall a good design.”
Wow Design has been associated with Amul for over five years for various projects. Most recently, the agency revamped Amul’s ice-cream scooping parlours.