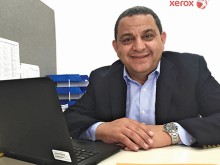 Xerox has appointed Ashraf ElArman as managing director of Xerox India, effective June 22, 2015. He is responsible for new business development, driving growth and achieving business objectives for the country.

“Ashraf will be responsible for leading the Xerox India organisation to achieve the company’s business objectives as part of Xerox Developing Market Operation’s growth plans for Xerox India,” said Roy Harding, chief operating officer, developing markets organisation, Xerox. “India is a significant growth market for Xerox and we will focus on continued channel expansion as well as extending our coverage and expanding our partner relationships throughout India.”

Ashraf joins Xerox India from his role as general manager of Xerox Egypt. He has been with Xerox since 1990 and has held various senior-level positions. “India is a country with great potential and with the investment and business climate looking up, it offers a tremendous growth opportunity,” says Ashraf ElArman.

Commenting on his new role, Sushant Dwivedy said, “This elevation comes as a wonderful opportunity for me to drive the Xerox Services mandate in India and build on potential business prospects in the DMS space. Xerox is uniquely positioned to offer end to end document capabilities to enterprises of all sizes further improving end-user experience of services. I aim to leverage the value proposition that company has built over the year and expand on the strong MPS and DMS offerings we have in India. I am really excited at the prospect of leading this mandate for Xerox in India and confident of our continued success in this highly promising market.”
Visit Xerox India in Hall 1, Stall D20, E04, PAMEX’15.