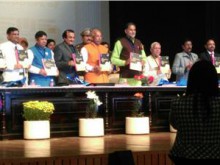 The All India Federation of Master Printer’s flagship conference, Romancing Print 2015, which was hosted in the Guru Jambeshwar University of Science and Technology (GJUS&T) in Hisar on 24 & 25 February 2015 was notable for “the deals which were inked during the two-day show”.

There were four major a announcements  in front of an audience of more than 500 delegates from India and abroad. Yan Chen, the Deputy President of the China Cultural Industry Development (Group) Corporation assured booking for 2000 sq/m of exhibitor space from the Chinese manufacturers during AIFMP’s trade show, Pamex 2015, in Mumbai from 9-12 December 2015.

In addition  Beijing Institute of Graphic Communication (BIGC) and GJUS&T signed a MoU for student/teacher exchange programme; plus BIGC agreed to sponsor the “free higher study of one student of GJUS&T”. The organising committee also published a 200-page book (Conference Compendium) of research papers. The research papers have been submitted by students, teachers and expert speakers. The best two papers will be awarded a handsome cash prize of Rs 1,00,000 each.

In spite of the well organised seminar,  Chief Guest Prof Kaptan Singh Solanki, chancellor and governor of Haryana arrival was delayed due to which the inaugural session was delayed by a few hours.

Kamal Chopra, the Chairman, International Relations of the All India Federation of Master Printers (AIFMP) said, “The programme was well planned, but due to the delay in arrival of the Hon’ble Chief Guest conference sessions were delayed at some of the places.”

Chopra added, “The international conference on future of printing was planned eight months ago. The conference was going to be organised under the banner of OPA but due to limited resources we planned to organise it in collaboration with the GJUS&T at Hisar. The idea of organising it under the banner of Romancing Print clicked in October. By then, everything including venue, collaboration etc. was already planned.”

There were other inputs about the quality of the research papers, and the lack of hospitality support. Most of the industry veterans took this in their stride and felt this is the need of the hour; and it’s important to ensure print knowledge is disseminated in centers like Sivakasi and Hisar.

Be that as it may, the students of GJUS&T were thrilled when the Ricoh team of Avijit Mukherjee and Anjana Saha announced that they would donate two digital press units worth Rs 1.5 crore free of cost to the college. The Ricoh team signed an MoU with the GJUS&T for the purpose.

Dev Nair, President of AIFMP stated, “One of the aims of a print school is to combine the creative use of technology and classroom training to ensure that print remains integral for the next generation of printers.”

Romancing Print is a seminar brand of the AIFMP – one of the world’s largest print body – which hosts a knowledge session every year on 24 February to commemorate Printer’s Day in India.