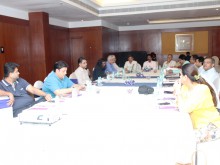 The promotional activities for PAMEX 2015 have already picked up India and with the recent international campaigns, the event has spread its wings globally as well. The All India Federation of Master Printers (AIFMP) marked its presence at two back to back international exhibitions – Print China 2015 in Guangdong and SinoCorrugated 2015 in Shanghai. An India Day was also celebrated in these two cities during the exhibitions. Pamex 2015 was extensively promoted in these exhibitions and during the India Day celebrations it generated lot of interest and enquiries from the country.  Following the heels of a cooperation agreement with the Printing and Print Equipment Manufacturers of China (PEIAC) that envisages sales of exhibition space by the Chinese, an agreement was also signed with the China Academy of Printing Technology (CAPT) to mobilize Chinese exhibitors for PAMEX 2015.

The PAMEX team also visited Gulf Print & Pack at Dubai to encourage participation from the global companies at the show.