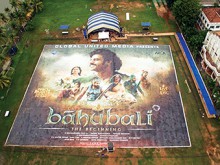 Chennai based Global United Media Company Pvt Ltd (India) has made world’s largest movie poster ever as part of the promotion for Baahubali, a massive Indian multi-lingual film that was released earlier this month. The official website of the reference book www.guinnessworldrecords.com has announced that after a lot of difficulty and hard work, the poster was finally laid out on the floor of a cricket ground at Jawaharlal Nehru Stadium in Kochi, Kerala, India and covered an immense space of 4,793.65 sq m (51,598.21 sq ft) – a space equivalent to 18 tennis courts. The movie poster humbles the previous record-holding poster which had an area of 4,709.30 sq m (50,690.28 sq ft) and was achieved by AK Parti (Turkey), in Istanbul, Turkey, only a month before.