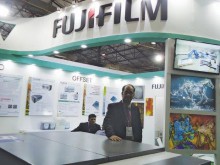 Swarm around the stall of FUJIFILM is for many reasons, among which the showcases of the ground-breaking PotevioCtP system and Acuity LED 1600 UV large-format inkjet printer. “This CtP system is featured with perfect dots, impressive stability and designed to create thermal and UV plates of 0.15-0.4mm thickness. Having been designed with external drum exposure structure, this CtP can deliver 2400 dpi resolution,” said SM Ramprasad, assistant vice president, Graphic Art Division, FUJIFILM India Private Limited. He added that the system could be a game changer in the pre-press arena.

Designed for creativity, FUJIFILM Acuity LED 1600 UV inkjet printer is a hybrid printer, which is yet another game-changer in the graphic art segment. In this respect, SM Ramprasad asserted that the printer is designed to cost-effectively print promotional graphics like POPs and such items in a UV way far beyond and ahead of conventional solvent printers do. Producing near photographic images, Acuity LED 1600 UV churns in the maximum resolution of 1200×1200 dpi.