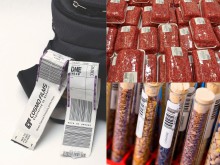 is not required and printing is done only for critical information like barcodes. Direct Thermal printing

does not require an ink ribbon for printing, and the image/impression formation takes place simply

when coated substrate comes in contact with the print head of the thermal printer.

to 70 degrees. A high temperature resistance variety with endurance level as high as 130 degrees is

said, “Direct thermal printing has been gaining significant prominence in recent times due to its ease

of use, low total applied cost and optimum image density and we are glad that we can offer both