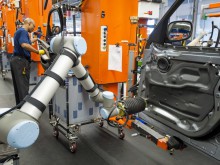 Most industry veterans would find this image rather ironic –they’re used to seeing robots as giant machines behind safety cages, not in close proximity to human beings.

That is all about to change.

Collaborative robots, or “Cobots” as they’ve been nicknamed, are now in India. These force-sensitive smart robots are capable of working next to humans in a collaborative manner – without endangering the safety of the humans. This groundbreaking innovation suddenly opens up numerous possibilities – allowing you to automate many areas of your factory processes where automation was simply impossible before now.

Universal Robots’ range of cobots is lightweight, portable and easy to integrate into existing production lines. They are also extremely flexible – with all joints offering an industry leading 720 degrees of rotation, and the UR3’s wrist joint capable of infinite rotation. Thus, these cobots have no blind spots and are able to achieve all angles with precision.

A Whole New World of Possibilities

In fact, Encon Systems, UR’s authorized distributor and solution partner in the region, has deployed UR cobots for their clients in application where automation with traditional robots was simply impossible. Their motto is: “if you can imagine it, we can automate it!”

Unlike traditional robots which require complex programming and need a long time to set up and commission, a UR cobot can be set up and deployed in less than 30 mins. What’s more – they are so easy to configure that even the most inexperienced users can quickly learn to program it in less than a day. Unbelievable? Come and try it yourself at our stall at Pack Plus 2016.

Their short setup time, light weight and easy programming also means that these cobots can be re-deployed to a different application/station as per production demand requirements – that too in minimal time. Unlike traditional robots which are dedicated to one application only, a UR cobot is mobile asset – allowing to leverage it again and again wherever the need be. UR’s entire range complies with ISO’s TS 15066 specification for collaborative robots. This means that these cobots are certified to be operated without safety caging/guarding*. This allows cobots and humans to work side-by-side so that humans can do the tasks that require human ingenuity and let cobots do the mundane, difficult, tiring, repetitive tasks. Cobots and humans can even work on the same part simultaneously.

Is there a process or task in your factory that needs a helping hand to get the job done? Now you can win one! Is there a manual process that you think can be automated? Then tell Encon Systems about it for a chance to win one of three UR robots. Simply contact Encon Systems with your application needs.