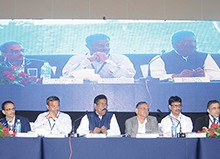 Printed thoughts are everlasting, provided with wings, intangible and indestructible. They soar like a crowd of birds, spread in all four directions and everywhere at the same time. AIFMP celebrated the wonderful art of print at their GC meeting in Chandigarh while promoting their upcoming PAMEX scheduled to be held in Mumbai.

The 227th Governing Council meeting of the All India Federation of Master Printers (AIFMP) was unique in many fronts; it is for the first time ever that the meeting was held at the city beautiful – Chandigarh in presence of more than 200 members including 124 GC members with 10 former presidents.

The GC meeting was inaugurated by Prof Kaptan Singh Solanki, the governor of Punjab, Haryana and administrator UT Chandigarh. Speaking on the occasion, Vijay Kumar Chopra, editor-in-chief, Punjab Kesari Group of newspapers and one of the former presidents of AIFMP said that he still remembers old days when they printed newpapers with letterpress. He also said that formed in 1953, AIFMP is the apex body representing the Indian printing industry, which draws its strength from 63 regional affiliate associations spread all over the country, having 2.5 lakh printers. Talking about the digital printing industry, he said, “The digital printing industry is seeing significant transformations with new technologies and applications providing cost-effective and customised solutions. For the foreseeable future, offset and digital will not only co-exist, but will also complement each other – with offset taking the medium-to-longer jobs and digital performing on short-to-medium run lengths. The booming Indian economy, increasing consumerism, entry of global brands in the country and opening of the sector to foreign investors are bound to offer growth opportunities to this industry.” Anand Limaye, honorary general secretary, AIFMP impressed upon the activities and achievements of the Federation. Later, Dr Dali Singh Cheema, hon’ble education minister of Punjab praised the working of AIFMP and said that he understands the hard labour put in by the printers for the development of society. He said he learnt the dedication of printers during his studies when he became editor of college magazine Famco in 1983 and visited some printing units. “It was great skill in assembling the characters one by one to make the pages for the magazines,” he said. He appreciated the way honour is given to the former presidents of AIFMP by making them sit on a raised platform. “Printing,” he said, “is the mother of all inventions because it is the way by which human recorded and conveyed thoughts and feelings.”

Earlier, welcoming Dr Cheema,  Dev Nair, president AIFMP said, “We are here on the fertile land of Punjab which is grain bowl of India. I wish that the state may become the cluster of printing and packaging and lead us in printing also.”

The success of the 227th GC meeting is attributed to the sponsors – Ricoh, Technova, Huber Group India, and Sakata Inx (India). Speaking on the occasion, Manoj B Mehta said it is a benchmark and all the future GC meetings must follow suit.