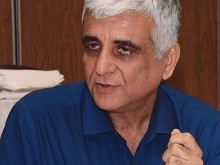 says Anil Arora, Print-Packaging.com, who is at the helm of meticulously planning and organising the upcoming PAMEX 2015 show in Mumbai. Here, Anil Arora, shares his views on printing industry in general and PAMEX in particular. Excerpts.

Anil: Undeterred by the shift to e-books and digital communication, the printers world over are evolving and successfully finding ways to improve sales and profits. At least, in the foreseeable future I don’t expect to see an obituary of the world printing industry. India has a flourishing market in all segments including the publishing market that is otherwise seeing the largest decline worldwide. This is because we still have a lot of catching up to do to reach the world consumption levels. Package printing is growing the steepest, riding an explosion in the consuming population. The Indian printer has geared up and smartened in use of both analogue and digital technologies. He is becoming adept at choosing an appropriate mix as he expands his business to meet the growing demands.

Q: What according to you are the strengths and weaknesses of the Indian printing industry?

Anil: The contemporary printers are fast learners and are now adopting global good practices. They are helped by the same quality that helps Indians excel in the field of IT- ability to intuitively understand digital technology in communication and the ways to supplement it with print. As they have become more professional in the business, barring exception, the downside is that their work is also less passion driven.

Q: In today’s scenario when the number of exhibitions are on the rise, how will you advice/suggest the exhibitors/visitors to opt for participation/visit? This is very important as the investment to be made on this account is going very high.

Anil: International exhibitions like drupa or China Print, national exhibitions like PrintPack and PAMEX as well as regional exhibitions- all have their role to play. The printer and the exhibitor have to be clear about the different characteristics of these exhibitions and the expectations from them. PrintPack and PAMEX happening within months of each other and in the same venue had created an anomaly that has mercifully been resolved and I must congratulate those at the helm of affairs at IPAMA and AIFMP for their farsightedness. PAMEX will be happening in Mumbai now onwards and will also be in a different calendar and financial year than PrintPack.

Q: How many exhibitors have confirmed their participation at PAMEX 2015? What would be the total expanse of the fair? Are these sync with your targets? Why/Why not?

Anil: The last time an edition of PAMEX was held in Mumbai was in 2006. That was probably one of the most successful exhibitions in this industry in the country and is remembered nostalgically by most exhibitors. The moving of PAMEX to Mumbai has caught the imagination of the industry and we have more than 200 exhibitors that have signed up already. We expect to have over 300 exhibitors eventually and also meet our targets. Though, the slowdown in the Chinese economy means that we may not have as many Chinese companies as we expected.

Q: What new can the exhibitors/visitors expect at the fair?

Anil: Recently, there has been a flurry of increase in space by the exhibitors who had signed up much earlier. This is an indication that there will be several running equipment on display. Some exhibitors have indicated that they would be launching new products in the exhibition while others would want to use the event to give a preview of their plans at drupa, six months later. Though I am privy to some exhibitors’ plans, they are still keeping it under wraps and want to roll them out in their own time and style. I can only share that among many other features, a digital feast with never before seen equipment is in the offing.

Q: As a show manager, how will you ensure that there is good number of visitors to the show?

Anil: An extensive visitor promotion campaign has kicked in. The road shows have been planned at two levels. A grassroots contact programme will see PAMEX being presented in the second and third tier towns in an extensive coverage in Maharashtra, Gujarat and Tamil Nadu. A four city zonal level contact programme will be organised to reach out to emerging towns. Newsletters, e-mail communications, SMSes, social media, news blogs, trade magazine ads, bus advertisement, hoardings and several other traditional methods of reaching out to visitors are extensively being used. However, the backbone of our promotion is an extensive database of prospective visitors that we have painstakingly put together over the years that we will rely on to send personal invitations by snail mail.

Q: What other efforts are taken by Print-Packaging.com to make it a best-in-class show?

Anil: A successful show results when quality visitors in numbers get to meet leading players in the exhibition. Building on such a success becomes easy. This kind of show becomes iconic, when it is institutionalised in the same venue at the same periodicity and time of the year. We have taken the first step in that direction.

Q: Any message for our readers….

Anil: With the Indian economy being singled out to lead the next phase of global growth, this is start of an exciting phase in the industry. The world will be making a beeline for PAMEX. Be there to see the best that the world has to offer and be spoilt for choice. The dates are December 9-12 and weather wise too, it is also the best time of the year to be in Mumbai.